I’m tired, and it is not from all the traveling and sleeping in different beds. I thought blogging would be like writing my articles at home. Yesterday I listened to the safari guide describe the traveling habits of  African Wild Dogs while squinting in the darkness taking notes. Today I finally threw my notebook in my bag. I think it is time for something new–being present.

Two days into our five-day safari, I get it.The morning starts at 4:45 am with a gentle knock at our door–“Mr. and Mrs. Klenk. Time for safari.” We climb out of bed and Paul is ready in two seconds. I take a bit longer. It is cold in the morning. It’s not what I wear that is important, it’s how many layers can I put on and not look like a marshmallow. We go to the gathering space, a large thatched room that morphs into a small coffee table in the morning and expands into an elegant dining room with flickering candles by night. Our safari guides stand at the table pouring us coffee and giving us a hearty hello. Paul may not like this, but I have to say they are the hunkiest group of guys I have ever seen. I wonder if having good legs is part of the job requirement. I watch the other groups warily. When they move, I move. Our guide Allyn knows me by now. I want our car to go first. I don’t want to follow in someone else’s dust.

Jimmy greets us at the car. He is our tracker. He lives on site. He is quiet and moves little. He rides on a seat jutting out in front of the car and doesn’t even totter when we go through water holes or down the deep sides of a river bed. He does not move his head much, but there is nothing that gets past him. He sees the flick of an impala’s white tail, hears the first shuffling step of a herd of  cape buffalo, and smells the sheening odor of the hyenas digging into a fresh carcass.

We ride for four hours in the morning returning to the lodge at 9:30 am. We are staying in  a private reserve. Neighboring lodges cannot cross into our territory and we cannot cross into theirs. The animals, luckily, are free to roam wherever they  want. Thank goodness. I don’t want to peer across a road and not be able to chase the lions.

That is one of the hardest parts for me to get used to. Kruger Park is not a zoo. It is wild land where we must respect the animals’ world. Cars politely take turns lining up to see a leopard in a tree. But when there is a lion and hyena stand-off, it is every car for itself. We leave the road, crash through thorn bushes, spin out in the two-feet deep sand river bed, and basically screech through the bush to beat the other cars there.

The first day we were on our night safari which starts at 3:30 in the afternoon and ends at 7:30 pm. That night was different. Time didn’t matter.

It was past twilight and Allyn heard some guides squawking on the radio, “Hyenas and lions, Tibavate Road.” We sped through the dust cresting hills with all four wheels in the air. The landings were hard, but the car was tough. We approached the clearing and  Allyn said tersely  on the radio, “Position 1, I say. Position 1.” He then slowed to a crawl and cut the motor immediately.  We could barely see in the darkness, but Jimmy turned on a red spotlight. It lit up the scene without changing the animals’ behavior. I crept over to Paul’s side of the car and pushed my way under his arm. 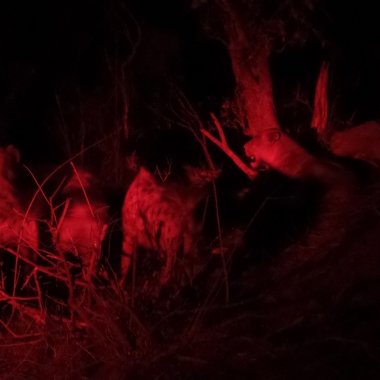 A lioness was cornered by eight hyenas. Her back was against two fallen tress. She lay with her paws out front, her eyes riveted on the creatures in front of her. I say creatures because that’s what they are. It seems God put them together out of all of the parts he had left over. They have short front and back legs yet their back and necks are so large and muscled they look  like the hunchback of Notre Dame. They scuttle back and forth sometimes even sideways. The sound, though. God made that unique. If it was just one grating hum like a cicada, you could get used to it. No. Not these creatures. They chuckle softly and then a moan begins from one. Another begins trilling in sharp barks. And then the screaming starts. Through it all, the lion stared straight ahead. She didn’t flinch. They broke apart and began circling her, one after another lunging towards her. I smelled something putrid and looked down. A hyena was crouched next to the car. They began using the cars as shields. And they kept screaming.

“They are either going to attack her as a group, or she will strike one herself. She will die if they all get to her. But she will kill the one she grabs,” Allyn said. His eyes never left the scene.

“Who’s going to win?” I whispered.

“It’s fifty fifty at this point,” he replied.

He turned and looked at me kindly. “Don’t. They are just as magnificent. Watch them work.”

The screams climbed higher and higher. Then two hyenas lunged hard and fast. The lion stood up and roared with her mouth wide open. Even in the dimness I could see her white teeth. She pulled up tall and roared into the hyenas’ faces.

The screaming stilled. The hyenas disappeared into the bush muttering to each other. The lion stood up and ambled through a gap between two cars. The last I saw of her, her tail flicked, just once.

4 thoughts on “Hyena vs. Lioness”

Where have we been?